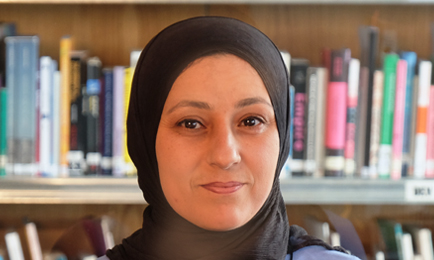 Manal El-Shahat (M.Sc., Ph.D) is an Associate Professor in the Urban Planning and Design Department (UPDD) at Ain Shams University (ASU) on leave. She is currently preparing the project “Cairo Labs”, a cooperation of the Ain Shams University and the Department of International Urbanism at the University of Stuttgart to promote knowledge production and exchange between the two universities

Dr. El-Shahat has over twenty years of teaching experience as an academic teacher and researcher in Egypt and Germany in addition to more than nine years of experience in the private sector. In 1997, she graduated from ASU and was immediately employed as a lecturer at the University. She received her Master’s and PhD Degrees from ASU in 2000 and 2005 respectively. A major part of her PhD research work was conducted at the Städtebau Institut (SI) in Stuttgart, Germany – within a fellowship of an universities exchange program. During 2006, she joined Prof. Bott’s research group at the SI where her teaching and research activities have extensively augmented, related to the Historic Arab and Islamic cities. From 2011 until 2013, she worked as the research programme coordinator for SI and Faculty of Architecture, German University in Cairo (GUC). A topic which never ceased to halt her interest nor her passion is the research about developmental processes of informal settlements which she has been lately investigating for over fifteen years. In this context, she worked as Senior Researcher, Director and Founder of the “EZBET Project” at the Department of International Urbanism. In addition to that, she was the project manager of an interdisciplinary research project entitled as: “Integrated housing with Immigrants” at the Department Sociology of Architecture and Housing at the University of Stuttgart.

El-Shahat, M.; El-Khateeb, S. (2012): Empowering People in Egyptian Informal Areas by Planning – Towards an Intelligent Model of Participatory planning. Conference Paper at the International Conference: Cities to Be Tamed? Standards and Alternatives in the spatial transformation of the urban South, Department of Architecture and Planning (DiAP) and School of Architecture and Society / Politecnico di Milano, Conference proceedings published in Planum – The Journal of Urbanism, November 2012.