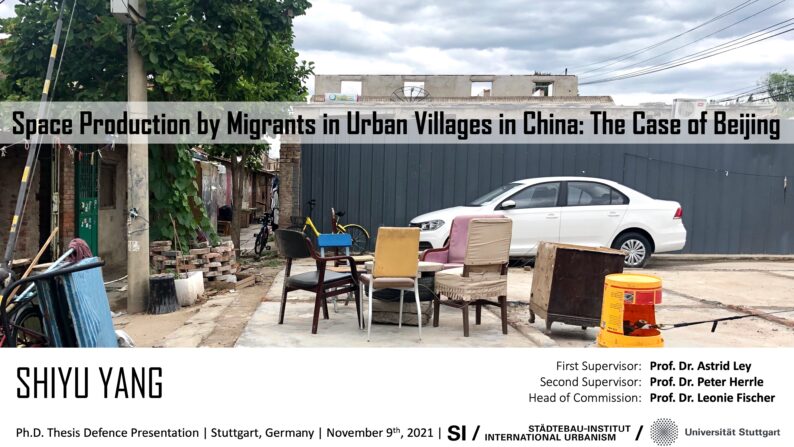 On 9th of November Shiyu Yang presented her PhD research on „Space Production by Migrants in Urban Villages in China: The Case of Beijing” successfully and completed her PhD with distinction.

Abstract
China’s rapid urbanisation is characterised by an influx of migrants into urban centres and sprawl of urban areas toward the suburbs. Along with the urbanisation process, the urban village, as the informal settlement resulting from dualism in China’s land and hukou system, has been an object of research since the first decade of this century. Its developing mechanisms, spatiality and approaches to its upgrading and redevelopment has been well studied. However, while urban villages have been acknowledged as migrants’ enclaves, too little attention has been paid to the impact of migrants’ activities on space in urban villages and vice versa. The potential heterogeneity embedded within migrants and their decision-making and everyday lives remain largely examined.

The key research question of the thesis is how migrants shape urban villages in China, and specifically in Beijing, through their social production of space. The thesis examines what role migrants play in the process of shaping informality embodied in the development of urban villages, what migrants’ everyday lives are like, and how the process of migration is reflected in space in urban villages. In addition, it also seeks to understand the applicability of Henri Lefebvre’s theory of space production to the analysis of space production in China, specifically in the case of informal settlements.

The thesis adopts grounded theory method with a design of case study approach. Shigezhuang village and Dongxindian village in Beijing, which accommodated migrant groups with different demographic profiles, were chosen as study cases for in-depth research, and a mixture of qualitative and quantitative research methods were employed to collect and analyse data.

Three aspects of space have been observed in the process of space production in urban villages, corresponding with the spatial triad conceptualised by Lefebvre, including: 1) representations of space – the space of governance and negotiation; 2) spatial practices – the space of everyday life; and 3) spaces of representations – the space of two-directional linkage. The space of governance and negotiation is conceived by different levels of government and the rentier class of indigenous villagers. While migrants are not the initial producers of the logic and forms of knowledge, institutional spaces are produced in response to migration. The space, with its character of ‘organised informality’, exerts controls over migrants but is also contested and resisted by them. The space of everyday life is the physical basis of space production. It has been found that spatial practices in urban villages were correlated with migrant profiles and migrants’ influence on the physical aspect takes place indirectly. Individual migrants also produce space through their daily routines and their connections to the urban routes. The space of two directional linkage is lived through migrants’ imagining of the urban destination and their memory of places of origin. As individuals, households, and members of a tongxiang community, migrants self-stage in the arrival urban villages through spaces of representation, while straddling the rural and urban to maximise living qualities and minimise risks.

The thesis implies that Lefebvre’s theory of space production can be applied to explain empirical studies in the context of China in its post-economic-reform era, where and when a high level of decentralisation and flexibility in governance can be observed. It also acknowledges heterogeneity of urban villages and migrants and highlights the critical role that migrants play in producing social space in urban villages in China. The thesis suggests that, in addition to housing, migrants’ employment conditions and their limited access to urban social infrastructure corresponding with the hukou system are of research significance. 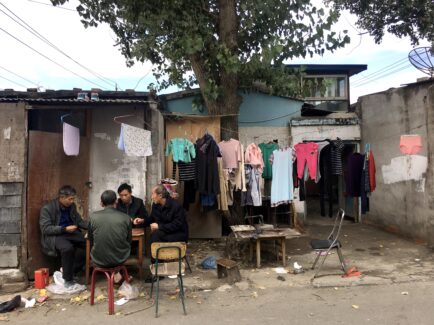