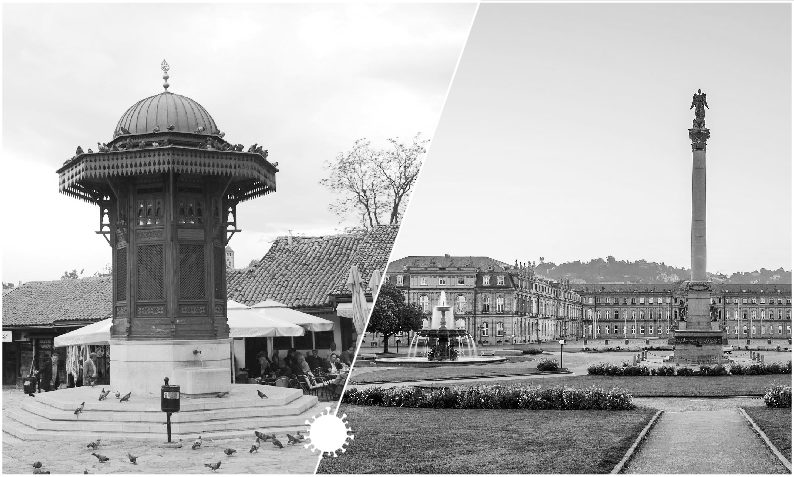 This studio aims at investigating the use and redefinition of public space under COVID-19.
The Pandemic that is currently sweeping our planet, has a large impact on public space in all cities across the world. Governments are implementing lockdowns and curfews, trying to control the situation. Social distancing in public is becoming the norm rather than the exception and the use of public spaces is being restricted and redefined.

Questions such as what are the impacts of the limited use of public space and the lock down like increased needs that arise within private spaces, increased usage of shared common space within buildings (like roof tops) and of parks or green areas. And how is the use  virtual space maybe changing to compensate for the lack of public space? Thus, this studio looks at how to reframing public space at various scales within the two cities Sarajevo and Stuttgart. Two parallel studios (in Sarajevo and Stuttgart) will be investigating their local context and phenomena such as social stress expressed through “riots” in a first step before developing strategies for public spaces during the pandemic. Thereby, dynamics of movement and the use of public space during COVID-19 (e.g. in Hamburg, the Schanzenviertel is now affected by huge numbers of party people since St Pauli and Reeperbahn is closed) will be observed and analyzed, among others. The aims of this project are to 1) analyze the redefinition of public space under the pandemic situation in the two contexts; 2) build mixed student groups that virtually develop a preliminary strategy for the public spaces built on the analysis, respectively in Sarajevo and Stuttgart; 3) conduct a joint workshop at the end of the semester in Sarajevo, in which the suggested strategy and potentially short-term temporary interventions can be implemented and tested. The latter, however, depend on the development of the situation. We look forward to an interesting and experimental semester together with the colleagues at the planning department of the University of Sarajevo.